You are here: Home › Blog › Carbon capture – case study for a Ropax ship 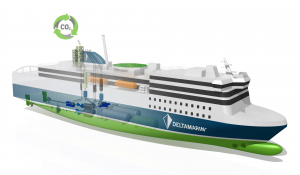 Understanding emerging technologies is more important than ever

The shipping industry is under a lot of pressure to cut green house gas emissions in the coming years. We at Deltamarin are seeing this first-hand, as today each of our design projects involves us in examining and implementing various technologies to enhance performance and reduce CO2 footprint. We are investing heavily in our R&D to gain and maintain the industry-leading knowledge of the technologies implemented on ships.

One of the emerging technologies that has maybe received less attention in the maritime context is post-combustion carbon capture. These systems can extract CO2 from a ship’s exhaust gases, after which the CO2 is liquified, stored onboard and eventually discharged to shore for either permanent storage or further use.

Deltamarin has recently participated in a joint industry project with Total, Minerva and DNV where pathways to zero emissions were studied for tankers. Carbon capture technology was studied among many other options and one of the conclusions was that it could provide “the 30% step” in carbon footprint before going into more expensive low or zero carbon fuels. This project has been thought-provoking and led us to examine the potential applications of carbon capture in more detail.

More particularly, earlier this year we joined forces with Wärtsila Exhaust Treatment to study how the system could be implemented in RoPax ferries. Wärtsilä has recently announced that it has product development under way and the company is also installing a pilot plant at its test facility in Moss, Norway.

Why have we decided to look at ferries?

Our thinking when starting the study was that RoPax ships could be good candidates for carbon capture as they operate on fixed routes where the captured CO2 can be frequently discharged to shore and less volume is needed for onboard storage. Many of the ferry operators have also selected LNG as their fuel. LNG has some inherent benefits for use with an absorption-based carbon capture system as it offers clean exhaust gases, and the engine fuel supply can be used as a heat sink for liquefaction of the captured CO2.

If green energy is available in the operational area, it would also be possible to use the captured CO2 to produce synthetic LNG when combined into electrolysis and methanation processes. This would then make part of the CO2 circulate back into the fuel supply. Obviously, this kind of infrastructure would also require some adjacent industrial users. 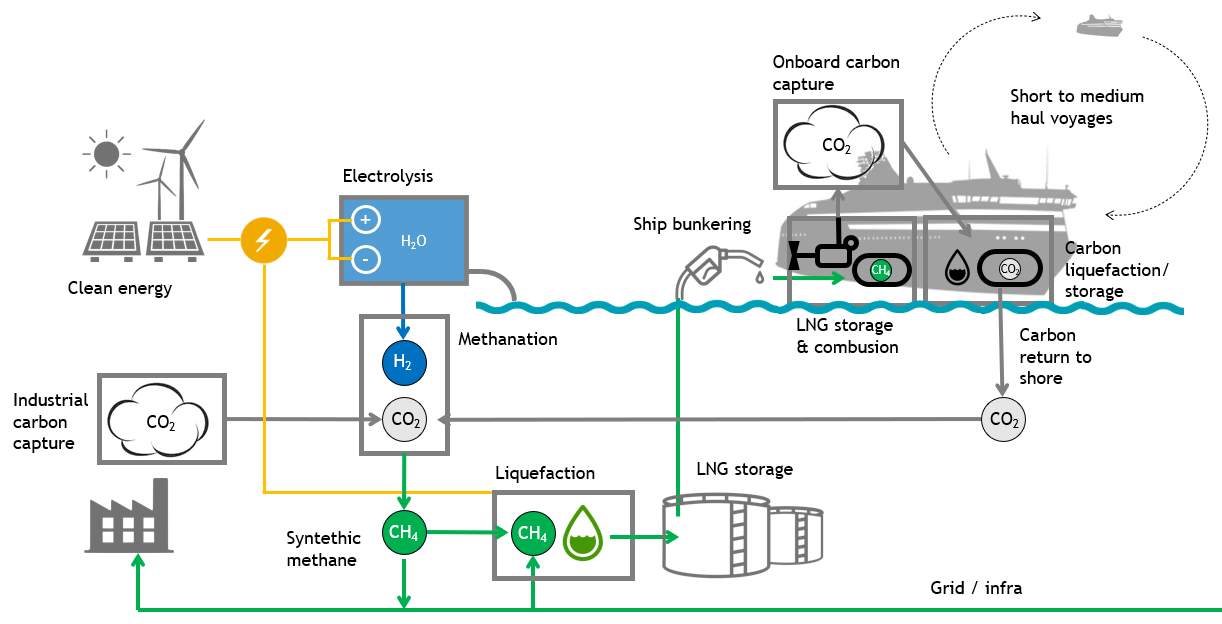 The study compared a medium-size 155m RoPax ferry newbuild with alternative arrangements for MGO, HFO and LNG fuels where two of the latter were also combined into a carbon capture system. Dimensioning of the exhaust gas treatment and carbon capture system and related auxiliaries were made in close co-operation with Wärtsilä, taking into account the heat balance of the ship. The vessel was then compared in the technical aspects of CAPEX, OPEX and emissions on three different routes. Compliance with the current and upcoming regulations such as EEDI and CII were also checked.

The study concludes that carbon capture system is technically feasible within the given arrangement of the case ship without compromising cargo or passenger spaces. The achievable CO2 capture rates vary depending on the operating profile from roughly 25% at the lowest for the HFO ship to nearly 40% for the LNG ship. When comparing the emissions against an MGO ship, the aggregate reduction with LNG and carbon capture could exceed 50%.

The additional CAPEX required for carbon capture and related auxiliaries was calculated in detail using Deltamarin’s cost modelling and information received from Wärtsilä. Put into the scale of the total newbuild cost of the ship, carbon capture implementation requires about 5…7% extra investment.

The key question of course is can this also make commercial sense, and if so, in what kind of circumstances?

Achievable capture rates depend on a number of factors, one of them being how much waste heat is available for the system. The capture rates can be analysed when heat balance of the ship, space restrictions for the systems and the configuration are known. After that, the payback time for carbon capture systems depends on two main things: how much fuel is burned during the operation (frequency and speed on the route) and the level of tax applied on CO2 emissions (in fact the CO2 tax and CO2 disposal cost difference).

The end conclusion of the study is that carbon capture looks technically feasible for ship integration and indeed a very interesting option in reducing CO2 emissions from ferries. The technology looks particularly promising for LNG-fuelled vessels due to some inherent benefits of the fuel.

As the technology will be built on existing knowledge of exhaust gas cleaning systems, it can also be expected to become available for clients sooner than some of the low- and zero-carbon fuels that might require longer timelines to make the supply and distribution infrastructure available. Each and every ship and operation is different, so it is not the only possible alternative for ferries moving forward in their decarbonisation, but definitely provides a promising alternative.

The full report of the study will be presented at the upcoming industry conferences and seminars. If you wish to have a presentation of the study sooner, please be in contact with info@deltamarin.com and book a meeting.

Linkedin
The low carbon story – part three
How long will your ships be compliant? – Here’s what we have learned about EEXI and CII