You are here: Home › Blog › How long will your ships be compliant? – Here’s what we have learned about EEXI and CII

How long will your ships be compliant? – Here’s what we have learned about EEXI and CII 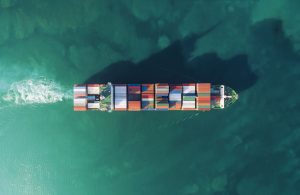 Why is this relevant for all ships?

The shipping industry is being pushed now more than ever towards cleaner emissions, not least from the legislation point of view. Previously, the “energy efficiency rules” were a potential challenge for new ships. However, now the rules are being extended to cover practically all ships, old and new. The new adopted measures EEXI (energy efficiency design index for existing ships) and CII (carbon intensity index) will be introduced from 2023 onwards in order to have a stronger impact than the current energy efficiency-related rules, EEDI (energy efficiency design index for new ships) and SEEMP (ship energy efficiency management plan) can. I will not focus on introducing the new rules in more detail here, but dive directly into the technical experience that we have in these rules. For getting a good basic understanding on these rules, I recommend, for example, recently published blogs from NAPA regarding EEXI and CII or finding more information directly from IMO.

How to deal with these rules and the somewhat blurry outlook to the future? To me it seems obvious that the only way to develop the rules is to move towards tighter emission targets, potentially even faster than currently indicated. Therefore, ship owners or operators should at least perform a first-stage analysis of the current status of their fleet. This will give a basic understanding of the size of the challenge that rule compliance will pose for future operations. The figure below illustrates the typical steps to take for the first EEXI evaluations. 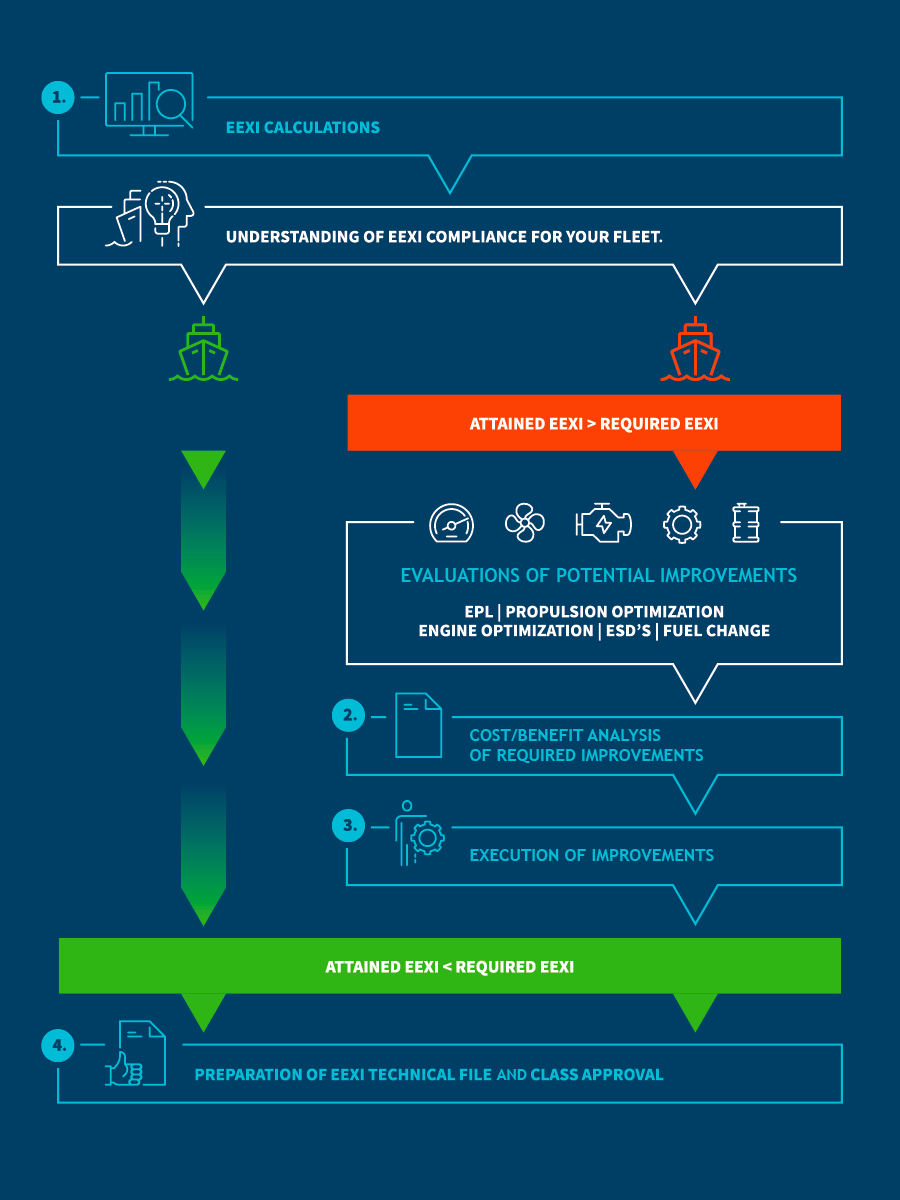 Steps in complying with EEXI


About the EEXI and CII calculations

The EEXI calculation itself is very similar to the EEDI calculation, which is a process that both Deltamarin and the entire industry already have much experience of. The only difficulty may lie in the fact that, for old ships, not necessarily all relevant information is available such as ship model test results. The technical calculation process and related guidelines, including various additional factors, will be further refined and discussed at the currently ongoing MEPC 77 meeting. Without doubt, the refining process will continue even after this.

The CII for existing ships is an even more straightforward calculation, at least in its current form. All that is needed is the ship’s yearly fuel consumption (turned into carbon emissions with a fuel-specific carbon factor), the distance the ship has travelled and its capacity. However, for a newbuild or if improvement alternatives should be analysed, the CII technical calculation will be more laborious. The technical tool for CII calculation in this case is the energy modelling. For this work, we utilise the exact same energy simulation tools as for any normal ship design project and the CII is actually one of the derivatives of this work. The analysis does not really cause much added work for the project. The CII is therefore not a perfect measure but definitely much closer to real ship operational efficiency than the EEXI or EEDI. From this point of view, since the ship energy efficiency is a kind of personal topic for me, I can’t be too sorry that energy modelling is now a must in every ship project!

How to reduce EEDI or EEXI value?

If the EEXI does not pass the requirements, the first option is to evaluate the possibility to include engine power limitation in the ship. We performed recently analysis on the B.Delta-fleet (over 100 sailing bulk carriers that Deltamarin has designed since 2010), and concluded that 95% of them actually passed the EEXI requirements, even if some of the ships were designed in the time before EEDI phase 0 was introduced for ships. For those “non-passing” vessels we concluded that engine power limitation of 10% would be enough to get an acceptable level of EEXI*. But on a global level, the situation with the existing fleet is obviously not nearly this good and there are many vessels that do not pass the EEXI as such.

Is it OK for all ships to limit their engine power? Probably not for all, but for many typical bulk carriers or tankers I dare say that it’s fully possible to introduce such a limitation. Why? Based on several projects we have done in recent years for decarbonised shipping and for newbuilds of almost any type of cargo ship, it seems that the typical operative loading for the main engine is rather low, varying anywhere between 50-70% during operation. I believe that the main reason for this is the extensive margins introduced during the design process and the higher design speed compared to today’s operating speed.

But if the engine power limitation is not an option, the energy efficiency improving technologies can be analysed. To reduce CII, similar technical methods are available as for EEXI/EEDI. As the rule is only recently been introduced, we have not yet encountered many requests to study in detail the energy-saving means for dealing with EEXI, but we have huge experience of EEDI and various improvement suggestions. The reason for this is that the ships designed today are aiming for EEDI phase 3, and complying with these limits is typically a challenge for almost any ship.

For EEXI or EEDI compliance with today’s rules, main engine power limitation and LNG as fuel are the main options that reduce the index value considerably. Various individual energy-saving technologies reduce the EEDI (or EEXI) value marginally, typically 2‒5% compared to the baseline. The solutions include shaft generators, various devices for improving hydrodynamic performance and waste heat recovery. One interesting alternative that may alone reduce the CII, EEDI or EEXI considerably is wind-assisted propulsion. Nevertheless, even moderate wind-assisted propulsion with a combination of several technologies can reduce the EEDI or EEXI index value considerably, by 10‒15% compared to the baseline, according to our experience.

I could briefly say that the entire ‘decarbonisation rule framework’ is far from perfect and will be further developed in the coming years. One of the biggest areas of development, in addition to various correction factors and deviations, is the introduction of alternative zero-carbon or carbon-neutral fuels to the framework. Today the rules focus only on the ship ‘tank-to-wake’ carbon emissions without considering the total greenhouse-gas impact on the environment, including the production and transportation chain of the fuel. Since it is in the spirit of the rule framework to reduce the global greenhouse gas emissions, it is inevitable that the rules are developing towards a more holistic ‘well-to-wake’ approach.

Therefore, even in today’s projects, we typically speculate how certain technologies or fuels could influence the future performance of the ship in question. This is considered both from an actual cost-benefit point of view, as well as from the current and future rule framework point of view. I can give a short example of the EEDI and CII results for a newbuild, where we recently studied carbon capture as a measure to reduce a ship’s environmental footprint. Depending on the potential carbon tax introduced for shipping fuels, we could evaluate that reaching a payback time of less than five years could be realistic, with carbon emission reduction rates between 25%-40% on a typical RoPAX ship.

Looking at the EEDI performance for the vessel, we could only speculate on how carbon capture would be considered in the future in the technical calculation. According to our analysis, we found that with diesel or HFO as main fuel (alternatives ALT1-3 in the below figure), the ship would not pass EEDI Phase 3 requirements. In the figure below, Alt4 represents the ship with LNG as the main fuel without carbon capture, which in this case would be enough to pass the EEDI requirements. Nevertheless, the alternative ALT3_CCS included HFO as the main fuel but capturing a portion of the ship carbon emissions. We can expect that this could be a potential EEDI-compliant solution for the future.

Speculative EEDI values for a RoPAX ship with carbon capture

I speculated somewhat further with ship CII values. The results are not always analogous with EEDI, since a ship’s operating profile has a massive impact on its CII. The first figure below presents the ship CII compared to the currently set level of required performance in 2026 (yellow line), with an operating profile where the ship operates mainly at a speed of 18kn and below. We can see that all studied alternatives, including the ship without carbon capture, would pass the requirements for way beyond 2026.

However, after simulating the CII result with an operating profile that has a higher average speed of operation, we can conclude that the diesel or HFO alternatives would not pass the CII index requirement in 2026 without improvements. Carbon capture could enable the ship to operate for the next few decades, if not the entire life time of the vessel, depending on regulatory framework development in the future.

Visualised with the above examples, it is important to analyse for all ships both EEXI and CII performance, since good performance in one of the indices does not guarantee an acceptable result for the other. Also, the EEDI and EEXI are ‘one-time indices, whereas CII is the required level of ship ‘carbon performance’, which will be constantly getting tighter.

If you have not been dealing with the ship energy and environmental regulatory framework before, it may seem highly confusing. But after all, the course is clear for all who want to improve ship design, and I can briefly summarise my view. To me, now more than ever it is important to focus on energy and environmental efficiency in both new and existing ships. Since the future regulatory development is still lacking many details, I would recommend focusing on the actual greenhouse-gas footprint as a basis for investment decisions, but obviously also complying with all the existing rules. According to my judgement, this path would be the most future-proof way. Since energy-efficient ships have been both a personal passion and also an important focus area in our company, I’m gladly available for more detailed discussion on the topic.