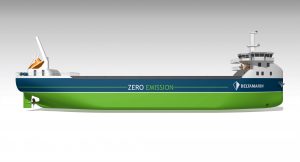 In my previous blog, I discussed the approach to low-carbon ship design in general. Of course, it’s not said that all ships will have to use zero-carbon fuel in the future, but this blog fast-forwards to a situation where we have already recognised that a zero-carbon fuel could be a true candidate for a ship project. Currently, hydrogen and ammonia are the only two truly zero-carbon alternatives for ship fuel. It would probably take another blog to write about them, but to me hydrogen is the alternative that requires more fundamental new-thinking in a cargo ship, especially if considering fuel cells as the power plant solution. I therefore present here in brief our own hydrogen-fuelled ship design. This is then the part where the engineering fun begins!

This blog series will also be a small part of a new upcoming Elsevier book Sustainable Energy Systems on Ships, which will provide holistic views on modern energy-efficient technologies and design methods in shipping.

Show me a zero-emission ship!

Our zero-emission coastal cargo ship is a flexible design for transporting dry bulk cargo at relatively low speed. The hull form is based on Deltamarin’s recently developed 4,900 DWT B.Delta Coaster design, and the speed and power performance has been verified by model tests at HSVA, Hamburg., We can therefore be quite confident that the ship is embodies top-quality elements of sustainability: it has fundamentally very low fuel consumption for transport tasks. The primary choice for ship fuel was liquid hydrogen and the power is produced by a PEM-fuel cell plant. The chosen vessel type and arrangement enables multiple variations of zero-emission operations. 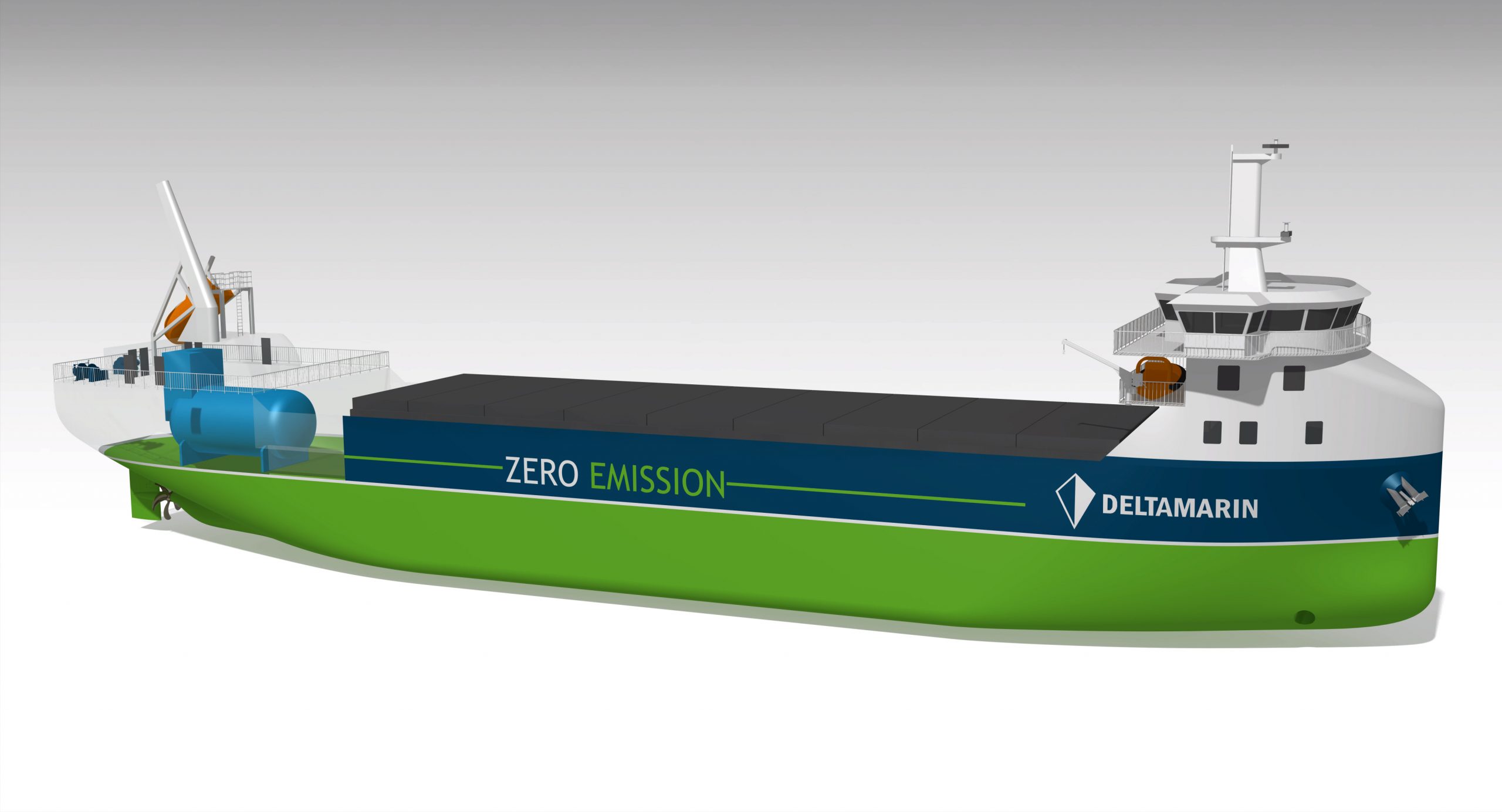 The modularised concept enables placing the deckhouse either in the aft or forward part of the ship. The main benefit of a forward located deckhouse, which was chosen for the presented design, is enhanced crew safety due to a clear separation between accommodation and the hydrogen-fuelled power plant. Liquified hydrogen is the primary fuel option for the ship due to the more compact storage density compared to compressed hydrogen. This design allows further optimisation of the ship arrangement for fuel savings. For instance, wind could be harnessed to provide additional thrust for the ship in the form of Flettner rotors or other types of sails.

Special features of the zero-emission ship

In general, the starting point for the development was to expect that the hydrogen-fuelled ship will have considerably larger costs in terms of investment, fuel- and operating costs over its lifetime than a traditional diesel-mechanical cargo ship. Thus, the power plant and component dimensioning could not be based on simple design points, and a holistic approach was taken from the beginning. Energy simulation of a potential operating profile always reveals certain areas, where “new innovations” are required.

The figure below is a Sankey diagram, an illustration of how a ship’s fuel energy is distributed in it as a function of a typical operation profile, including operation at 10kn speed and harbour idling, unloading and loading times. For me, this Sankey diagram is very different from a typical diesel-fuelled ship. To summarise the key differences between the current machinery and a typical cargo ship’s machinery, it’s mostly about the power plant type and an added level of safety-related considerations. On the system side, the ship’s propulsion train is fully electric, and the “machinery” is dimensioned in a completely different way to that of a diesel engine plant. The fuel cell system peaks in efficiency at much lower loads than an internal combustion engine, but on the other hand the plant sizing is very flexible. In addition to more extensive utilisation of battery energy storage, the ship heating systems also deserve a special mention. The chosen fuel cell type will produce waste heat in large quantities but at rather low temperature, so considerable re-design is also required in ship heating systems for this type of vessel. Shore connection is also a “given” for this ship, expecting that shore-side electricity will be far more cost-efficient than kilowatts produced from hydrogen fuel.

The zero-emission ship concept presented in this section is based on key principles of energy-efficient ship design: focusing on the largest energy consumers and optimising them. At a conceptual design stage, the focus has thus been on ensuring that the ship has a highly efficient hull and that the design is flexible enough to be able to include several energy-saving devices or even compressed hydrogen or other forms of zero-emission fuel, if the surrounding fuel infrastructure demands an alternative to liquid hydrogen.

In general, the process of designing a ship with zero-emission fuel onboard is not very different from traditional ship design. Everything starts from understanding the requirements for vessel transportation and optimising the design around these requirements. It is normal for each ship project to consider several new elements or innovations, and the markets and surrounding regulatory environment force the designers to constantly adapt to new solutions and technologies.

However, when considering new fuels for shipping markets such as hydrogen, the missing rules and established solutions for the infrastructure force the designer to take a much larger leap into the unknown than normal. An especially challenging part of this type of design is the approach to the classification design stage where, in the absence of applicable rules for certain technologies or fuels, the so-called “alternative design process” is required from a classification point of view. This process requires much work to demonstrate that the developed solution has a similar or improved level of safety over conventional solutions. It is certain that a zero-emission ship design will include much intensive cooperation with the authorities, makers, classification party, designer and operator.

For instance, new technologies, such as fuel cells require close cooperation with the equipment makers, since no large reference libraries exist from previous projects. In practical zero-emission ship design work, close cooperation with researchers in development projects in terms of both ship energy efficiency and zero-emission technologies has been of great benefit to Deltamarin. As in any ship design job, it is important to be able to understand the theoretical background of the equipment the design includes in order to be able to judge its fundamental suitability and profitability in the ship in question.

I hope that this blog has given some insight into designing a new type of ship from a conceptual point of view. However, once the ship concept becomes reality, many more concrete decisions and analysis are required in order to ensure that the ship is optimised for the actual route. My next blog will be about that with a newbuild RoPAX case story from an energy-efficiency point of view. Stay tuned!