You are here: Home › Blog › CHEK out our latest news regarding decarbonisation and digital design!

CHEK out our latest news regarding decarbonisation and digital design! 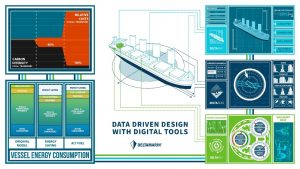 In our last blog, my colleagues talked about our hydrodynamic modelling and analysis. One of the main take-aways from it was that a strong foundation for tested and built references for models is important for bringing confidence to the simulation results, which can be performed during ship design stages to optimise ship energy efficiency and carbon intensity. Another important message from the text was that it is important to focus on optimising the design to real-life conditions. This is where I take over with some news and examples from our latest development project.

I believe it’s fair to say that most of us are after true decarbonisation of shipping. What I mean is that there is a genuine need globally to achieve reductions in greenhouse gas emissions in all industries including shipping. The new rule stipulated by the IMO regarding the ship carbon intensity index (CII) is not perfect, but still it is a step to the right direction, since the idea is to evaluate ship performance based on actual operation. We discussed the new rules EEXI and CII in one of our blogs last year so I will not go further into that topic here.

How to decarbonise, overall? 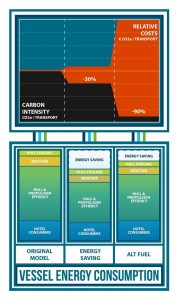 ownership of the vessels, compared to the traditional fossil-fuelled designs. Therefore, our logical conclusion is that maximising the energy efficiency of the ships should be in the primary focus, before turning to the low-carbon fuels.

Shipping decarbonisation can be divided into three main groups: operational improvements, technical upgrades and design optimisation, and carbon-neutral or zero-c

Where do the maximised energy savings come from?

If I try to condense this BIG topic to a small statement, there are two key issues for creating energy savings, also considering the commercial feasibility of the solutions. The first aspect is related to starting early. In practice, in the case of a newbuild, the main solutions must already be locked down during the conceptual design phase of the ship. This is the time and opportunity to create massive energy savings for the ship compared to the existing benchmark. The second aspect is related to also considering the operational profile as accurately as possible in the design and equipment choice. In other words, the aim should be to create a holistic model of the ship that would allow simulating the main aspects of an efficient ship: good cargo-carrying capacity and good performance in operation.

Demonstrating the process in practice

Both these energy-saving aspects are considered in our ongoing EU-project CHEK, where Deltamarin is the ship design partner in the large consortium consisting of technology providers, research parties, classification society representation and ship charterer and owner. The aim in project CHEK is to decarbonise long-distance shipping and we have two example ship platforms for the case study: A Kamsarmax-sized bulk carrier and Meraviglia-class cruise ship. The ultimate decarbonisation solution is a carbon-neutral fuel, for instance Wärtsilä is developing hydrogen-fuelled engines in the project. However, before the alternative fuel solution, the project targets are in creating substantial, 40–50% energy savings for the ships compared to a reference level, which in the project has been set for typical representative EEDI phase 2 vessels. We have also chosen to analyse vessel the carbon intensity index (CII) and utilise it as one performance indicator in the project. The energy savings include operational measures, technologies and design optimisation.

In project CHEK, we have real vessels as operational benchmarks, and some of the CHEK technologies will be also demonstrated onboard. For example, two WindWings by BAR Technologies and Yara Marine are installed onboard a bulk carrier. Hasytec’s ultrasound antifouling system is also being tested onboard. Some of the technologies have already been deployed and proven their performance in service, but in CHEK they are further developed and tested in laboratory conditions. Deltamarin’s role is to integrate all of them into the digital ship models. Examples of these technologies are Silverstream Technologies’ air lubrication and Climeon’s waste heat recovery. The ultimate goal is to create a future-proof ship design platform applicable to any ship type, following the above-mentioned energy-saving principles. In practice, we build the platform on the basis of our digital design tools, which we have introduced in our earlier blogs. The future-proof ship design platform includes new modelling and optimisation dimensions not only in the propulsion processes connected to the technologies and the ship’s external forces, but also regarding ship life-cycle impact.

In project CHEK, we perform the digital modelling in three “generations”, which in my mind is a very similar process that can be implemented in any ship design project. The first-stage “digital prototype” is necessary for establishing a baseline for the design. In project CHEK, we combined the historical measured operational data from reference vessels with a first prediction of our “CHEK vessel” performance. Already then, we got an understanding of how much fuel savings we believe we could gain with the new design and a combination of technologies, and also the impact on other relevant indicators such as carbon intensity. In a normal ship newbuild project, the purpose of the first digital prototype is typically to predict the level of efficiency of the vessels, considering the main targets, which might be absolute consumption, emission level and costs or a combination of them. The main areas to be developed are also identified.

In project CHEK, we are already at the second stage of digital modelling. In a normal ship design project, this would probably be performed during the ship contract development stage, and in project CHEK it is called “digital master”. There we have already replaced the historical operational reference with new fully digital representation of the ship hull and the performance in virtual seas. In practice, hindcast weather data was obtained along a typical series of waypoints for both case ships, and was combined with the ship hull and propulsion performance. This enabled evaluation of, for example, the impact of WindWing sails on our bulk carrier case ship. The subsequent impact on the ship machinery and the other “CHEK technologies” such as Climeon’s waste heat recovery system was also simulated as the result, along with the main project performance indicators. When examining the performance predictions of the new digital designs without the technologies, the CII of both vessels would stay on the required level at least until 2033 (assuming that the CII reduction rate after 2026 is 2% yearly and assuming low fouling on the hull). Nevertheless, with the potential technology combo the current simulations predicted staying compliant beyond 2040, but many details and cross-connections between the ship and the technologies must still be made more accurate in the upcoming work.

For this purpose, we have the next digital modelling stage, which is called “Digital twin” in project CHEK. Despite the name, we are not intending to form a full digital twin in its typical meaning, for example by connecting the digital model to real-time data. In this project, the focus of the “Digital twin” is mainly on assessing more accurately the impact of the multiple technologies and optimising the design considering both operational aspects, the fundamental ship design practices and the technologies. In practice, we collect data both from the onboard technology measurements and from laboratory tests. This data is utilised to improve the earlier digital models.

The value in digital thread

Based on our digital development journey over the past 10 years and more, I have made certain observations, which I would like to share with you as a conclusion. First, ship digital models are tools at various stages of ship life cycle that can help us to reach our goals of decarbonisation. They can be used, for example, to predict performance, analyse scenarios and optimise the design and entire operation.

Secondly, a possible pitfall of digital modelling is to aim for perfection or too many details at once. The most difficult and painful thing is to be able to navigate during the various (in this case, design) stages and to have the nerves to focus only on essential questions. In practice, this means simplifying some interactions and processes but aiming to always validate these assumptions at subsequent stages.

Finally, taking small incremental steps in digital modelling along ship life cycle is in my mind a key to creating digital twins for ships once they start their operation. The reason is that I believe that it will never be practical to precisely measure everything onboard. Therefore, digital modelling and prototyping during ship design development, focusing on the essential questions at each step, give valuable help in correctly defining the ship’s digital twin. Even before digital twinning, the digital models can be utilised to verify ship efficiency between design and build. Digital representation of the ship could also be used to make it faster for the ship’s crew to master and learn to optimise the operation of a new ship.

Therefore, with or without the twin, digital modelling opens us up new horizons for ship life cycle optimisation and it is surely exciting to be a part of it!