You are here: Home › ShipPax Award for Safe Return to Port presented to “Spirit of Britain” 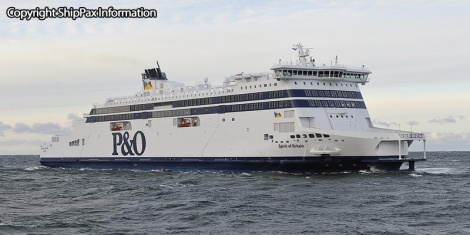 “Spirit of Britain”, the Channel ferry of P&O Ferries has received the Safe Return to Port ShipPax Award. The award was delivered at the Ferry Shipping conference to the owner P&O Ferries, to the builder STX Finland and to Deltamarin.

The awarding jury states in the diploma: “The SPIRIT OF BRITAIN is the most technically advanced Channel ferry, incorporating a number of innovative features in response to new environmental and safety legislation. The ship’s absolute novelty factor is the adoption of IMO’s Safe Return to Port rules before they came into force.”

The 3D model  created by Deltamarin already in the early stages of concept development, was used for the first reviewing of the vessel’s capability to return to nearest port after a casualty based on the rule proposal.

The same model was developed further throughout the different design phases and analysis was carried out continuously to verify and secure the required redundancy. Alternative methods were studied, when considered feasible, to improve redundancy and at the same time to find out simple and cost effective solutions. The final model was delivered together with the vessel and is used for crew training and as a decision support system for mitigating actions after fire casualties.

This year the ShipPax jury awarded noteworthy design features and creative ideas on newly-delivered ferries, ro-ro and cruise vessels already for the 13th consecutive time. Deltamarin is proud to have been participating in this novel project and wishes to congratulate both P&O Ferries and STX Finland for the award!

Linkedin
Deltamarin congratulates Dockwise!
Deltamarin wins the order for the design of a series of stainless steel chemical tankers