You are here: Home › Success of Deltamarin’s B.Delta continues – over 100 ships ordered 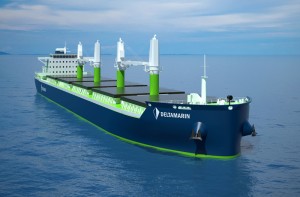 Deltamarin is proud to announce that so far a total of 103 B.Deltas and derivates have been ordered by several world-known ship owners at nine Chinese shipyards. The latest addition is the order of eight open hatch B.Delta37 bulk carriers by Polish shipowner, Polska Zegluga Morska P.P. (Polsteam), at Yangfan Group shipyard.

The main dimensions of Polsteam’s B.Delta37 are 179.99 m in overall length and 30.0 m in beam, with cargo carrying capacity of 50,000 m3. With a service speed of 14.0 knots, at design draft the model tested daily fuel oil consumption is expected to be 17.6 mt including 15 % sea margin, ISO conditions. EEDI is calculated to fulfil the 2020 Phase II requirement, i.e. more than 20 % below the baseline.

The total contract value of Deltamarin’s work with Yangfan Group, to be carried out over an estimated period of six months, is around 1.0 M€.

For the time being, Yangfan Group is building a total of 21 B.Delta37 vessels, two for Tunisian owner Transbulk, eleven for Italian d’Amico, and the latest eight for Polsteam.

Deltamarin’s B.Delta37 has attracted significant attention in the industry due to its best- in-class (handysize segment) performance in terms of a range of parameters such as low fuel oil consumption, low emissions, EEDI, deadweight intake and lightweight particulars.

The vessel also has excellent manoeuvrability and performance in heavy seas as experienced during the sea trials of the first B.Delta37, MV “Wuchang”, which was delivered to the owner, The China Navigation Co. Pte. Ltd (CNCo), in October 2013 from Chengxi Shipyard. In the meantime, sister ship MV “Wuchow” was delivered as well to CNCo. As a result of the successful sea trials, China Navigation confirmed an additional order of eight B.Delta37 bulk carriers at Ouhua Shipyard, increasing their total order number to 24 vessels.

Along with the B.Delta37 bulk carriers, B.Delta43 version of the bulk carrier is already being built. Discussions about further contracts on other sizes, such as B.Delta25, B.Delta64, B.Delta82 and B.Delta210, are ongoing with several shipowners and yards.

About Polska Zegluga Morska P.P:
Polska Żegluga Morska (Polsteam) was founded in January 1951. In January 2014 Polsteam owns and operates 70 vessels. These are bulk carriers from handy size and panamax sector, liquid sulfur carriers and ferries. As for the indigenous maritime Polsteam is by far the largest owner and operator of a fleet, represents about three quarters of all ships belonging to the Polish shipping companies. On the international market, Polsteam is among the largest shipowners of dry cargo vessels. Polsteam is a state-owned enterprise, and employs about two and a half thousand officers and rank crews as well as 260 workers on-shore staff.
www.polsteam.com.pl

About Barry Rogliano Salles (BRS):
BRS was founded in 1856 and is one of the largest international shipbroking firms with more than 200 brokers. BRS is active world-wide in all maritime segments and can bring its expertise in all kind of shipping transaction and associated contracts:  new-building contracts, second-hand sale and purchase transactions, charter parties or contracts of affreightment over any time span for all types of ships and floating vessels. BRS has currently offices in 11 different countries: China, Singapore, Hong-Kong, Dubai, Paris, London, Athens, Geneva, Hamburg, Madrid and Luxemburg.
www.brs-paris.com