Entering the green future with the help of fresh wind?

You are here: Home › Entering the green future with the help of fresh wind? 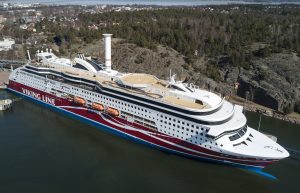 It is with great pleasure that we at Deltamarin are following and supporting our client Viking Line in their efforts to operate in a more environmental-friendly way. Their latest effort has been to implement the use of wind energy as an additional source of thrust on board their vessels.

The principles of rotor sail and Magnus effect*) have been known for decades. The current attempts of ship owners to utilise all possible means to cut emissions and the recent development work by the Finnish company Norsepower building rotor sails in carbon fibre has again put the idea in the spotlight.

Deltamarin started working with Norsepower back in 2013 to understand fully the benefits of this innovative solution. At the beginning of 2014, we launched the DeltaChallenger, a ro-pax concept of the future. In the project, we calculated a possible additional thrust generation of 1.3 MW on the Nynäshamn – Ventspiels route (about 10% of the needed thrust on that crossing) for an energy input of only 160 kW with the help of six rotor sails.

This route is perfectly suited for rotor sails, with strong feasible side winds available, but the idea is in any case interesting for ship owners to explore.

At the end of the same year, we started working with Viking Line to develop their next-generation vessel, the Viking Line MoS. It soon became clear that Viking Line shared our ambition to master the wind as part of the efforts to cut down emissions. Thus, we had the pleasure of including two rotor sails on the vessel currently under construction in Xiamen, China.

The rotor sails’ average reduction of propulsion power on the route was estimated in cooperation with Norsepower. Viking Line MoS also includes many other features for saving energy, such as an efficient waste heat recovery system. Therefore, the influence of the rotor sails on the holistic energy balance was studied with the energy flow simulation tool that Deltamarin has configured.

This ensured that the lowered base load of the ship was considered once the other systems had been dimensioned.

Later, as a natural continuation of this co-operation, Viking Line and Norsepower turned to us early in 2017 with a request to participate in the development of the design of the first ever rotor sail to be installed on board a ro-pax vessel, the current crown jewel of the Viking Line fleet, Viking Grace.

Deltamarin provided a concept study covering a check of ship stability, required structural modifications, rule compliance and electrical integration to ship systems for several rotor sail locations aboard Viking Grace, in order to find the best one. After the location was agreed in cooperation with Norsepower and Viking Line, based on the study, Deltamarin continued providing the basic design of a rotor sail foundation, new antenna platform and electrical design. Satellite antennae had to be relocated due to the large size of the rotor sail. Some structural challenges were introduced due to the thin plate thickness of the location and high thrust power of the rotor sail. 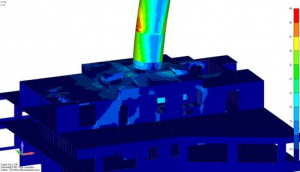 The dry docking time in January 2018 for the foundation installation was short, so the structural modifications to ship had to be easy to implement, and at the same time structural strength had to be ensured. Due to these reasons, Deltamarin made an extensive Finite Element analysis of the structure and successfully overcame all the challenges.

We at Deltamarin hope that the rotor sail solution on board Viking Grace proves to be a success and we wish her fair winds and following seas.

*) The Magnus effect is a force acting on a spinning body in a moving airstream, which produces a force perpendicular to the direction of the airstream. The Norsepower rotor sail solution is a modernised version of the Flettner rotor – a spinning cylinder that uses the Magnus effect to harness wind power to propel a ship.