You are here: Home › Flexens’ Power2AX project focuses on green hydrogen for a cleaner future 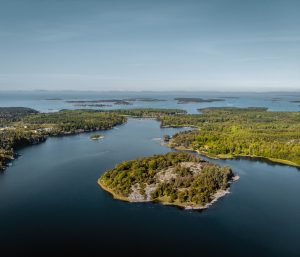 Deltamarin supported Flexens in its Power2AX project by conducting a ferry comparison study with the aim of investigating the substitution of diesel-fuelled ferries with hydrogen ferries in the Åland archipelago. Flexens’ unique Power2AX project focuses on demonstrating a 100% renewable energy system in the Åland Islands. Deltamarin’s study provides an estimation of the technical feasibility of introducing fuel cell ferries in the Åland archipelago that utilise hydrogen as fuel.

The study compared the concepts of hydrogen and state-of-the-art diesel-hybrid ferries based on existing operational targets, and provided information on their technical, operational and cost differences. Deltamarin analysed the operational profiles of current reference vessels and combined the data with the new vessel information. Preliminary powering requirements were created and evaluated, which served as an input to the ferry comparison energy simulation. Based on this, an energy model was compiled and a regulatory overview with preliminary HAZID was made. One purpose of the study was to create a cost estimate for the ferry in comparison to the diesel-hybrid alternative. This was achieved with Deltamarin’s cost model and related expertise.

The study concluded that batteries provide beneficial effects to fuel consumption and operations in both alternatives. The hybrid version with a diesel-electric power plant combined with an energy storage solution is a tried-and-tested solution applicable today. The hybrid version enables optimum engine loading throughout operation but does not eliminate CO2 emissions because of the diesel engines. In a fuel cell ship, some battery capacity is always required for energy management, but a larger battery further helps to optimise the fuel cell plant efficiency. Therefore, one focus of the study was to simulate the fuel cell power plant with various sized batteries to point out the sweet spots between the power plant peak efficiency, fuel consumption and CAPEX of the system.

The hydrogen alternative is a potential solution for a zero-emission ferry. However, the lack of regulation and rules for hydrogen as marine fuel today does set some challenges for the design of a hydrogen ferry. Additional work in the form of a risk assessment during the ship design is required due to the batteries. Nevertheless, the results show that the hydrogen alternative is competitive in terms of cost compared to the hybrid alternative.

The outcome indicates that there are grounds for the project to move forward. The study shows that significant reductions of CO2 emissions and even zero-emissions are achievable with the chosen path. The next step should include a specific and more detailed ferry design developed for the selected alternative to eliminate certain assumptions about powering requirements and vessel performance, as the study was based on reference data from Deltamarin’s own designs. Due to a broad scope involving several new technologies, Flexens has applied for EU funding to move the project towards the investment stage, and project realisation is expected to be in 2024.

The study and the Power2AX project were presented at the ”Åland hydrogen webinar” organised by Flexens on Friday 22 January.

You can read more about the project in Flexens’ press release.