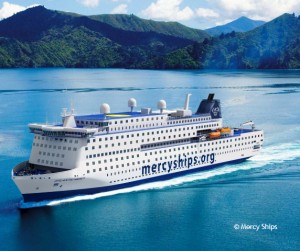 Deltamarin’s contract includes approval, procurement and detail design for the vessel, which will be the world’s largest civilian hospital ship, and the first of its kind in Deltamarin’s history. Deltamarin has earlier developed, for yard tendering purposes, the concept design of the vessel together with Stena RoRo, who will manage the actual construction of the hospital ship. The shipbuilding contract was successfully negotiated by shipbrokers Barry Rogliano Salles (BRS). The delivery of the ship is planned for July 2017.

Excited about this unique project, Director of Deltamarin’s Marine business, Mr Jarmo Valtonen, comments: “When developing the new vessel concept together with Stena and Mercy Ships, we have learnt a lot about the goals and visions of Mercy Ships, and it gives us great pleasure to be part of this very special project to help the underprivileged in the developing nations”.

The vessel will be certified as a passenger ship for long international voyages and will be registered under the flag of Malta with Lloyd’s Register classification. The main dimensions are 174 metres in overall length and 28.6 metres in breadth. The design service speed will be 12.0 knots. The vessel will have two hospital decks and can carry 500 persons on board when sailing; when in port, the capacity will be 950 persons. There will be a total of 641 beds in the 277 cabins. The vessel will even house a school for children of the staff.

The total value of this contract awarded to Deltamarin by CSIC is around 4.2 M€, and the work is to be carried out over an estimated period of 15 months.

About Mercy Ships:
Mercy Ships uses hospital ships to deliver free, world-class healthcare services, capacity building and sustainable development to those without access in the developing world. Founded in 1978 by Don and Deyon Stephens, Mercy Ships has worked in more than 70 countries providing services valued at more than $1 billion, impacting more than 2.42 million direct beneficiaries. Each year Mercy Ships engages more than 1,600 volunteers from more than 45 nations. Professionals including surgeons, dentists, nurses, healthcare trainers, teachers, cooks, seamen, engineers, and agriculturalists donate their time and skills to the effort. Mercy Ships seeks to transform individuals and serve nations one at a time. The charity has offices in 16 nations.
www.mercyships.org

About CSIC:
Established in 1999, China Shipbuilding Industry Corporation (CSIC) is a major state-owned enterprise group and is one of China’s largest shipbuilding and ship repairing groups. It has 46 industrial subsidiaries and 28 R&D institutes. Currently, the group has 7 shipyards with an annual new-building capacity of 5 million dwt. Its longstanding experience and comprehensive range of skills has resulted in the group being able to build all kinds of high-quality merchant and naval ships.
www.csic.com.cn

About Stena RoRo:
Stena RoRo AB designs and develops roll on/roll off and RoPax vessels, passenger vessels, and ferries. The company offers commercial vessels for bareboat, time, and voyage charters; and commercial management services. It serves operators and ship owners in Sweden and internationally. The company was founded in 1976 and is based in Gothenburg, Sweden. Stena RoRo AB operates as a subsidiary of Stena.
www.stenaroro.com

About Barry RoglianoSalles (BRS):
BRS was founded in 1856 and is one of the largest international shipbroking firms with more than 200 brokers, active world-wide in all maritime segments and can bring its expertise in all kind of shipping transaction and associated contracts:  new-building contracts, second-hand sale and purchase transactions, charter parties or contracts of affreightment over any time span for all types of ships and floating vessels. BRS has currently offices in 11 different countries: China, Singapore, Hong-Kong, Dubai, Paris, London, Athens, Geneva, Hamburg, Madrid and Luxemburg.
www.brs-paris.com