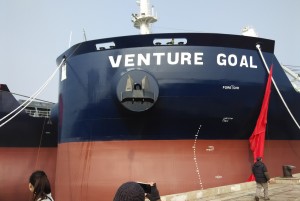 The first B.Delta43 bulk carrier for the German shipowner Hamburg Bulk Carriers (HBC) was successfully sea-trialled and delivered on January 24, 2015 at a special ceremony at Qingshan Shipyard of Sinotrans & CSC SBICO.

The delegation and top management of Hamburg Bulk Carriers who attended the ceremony expressed their satisfaction with the ship’s performance, as observed during the conducted trials, where B.Delta43 confirmed predictions on speed and deadweight to a very high accuracy. The B.Delta43, which is an elongated version of the B.Delta37 by 10 m, also demonstrates improved manoeuvrability compared to standard class bulk carriers and very low vibration levels due to the optimised propulsion arrangements.

B.Delta43 has already attracted significant attention in the industry due to its best-in-class performance, while the intelligent, compact design of the ship offers the lowest shipbuilding cost, maximising the return on investment for prospective shipowners.

After more than 14 years of successful co-operation between Deltamarin and major Chinese shipyards, B.Delta43 can now be built in most yards, while our local China team ensures effective project management and yard assistance in production.

The four B.Delta43 vessels for Phoenix Shipping & Trading S.A. of Greece are sister vessels of the ten B.Delta vessels earlier ordered from the Chinese Qingshan Shipyard of Sinotrans & CSC SBICO, with the same principal dimensions, cargo capacities and fuel performance.

Deltamarin’s contract with Qingshan shipyard covers consultancy, design and engineering services. The value of the contract is approximately €1M and the estimated contract period is ten months. Delivery of the vessels is planned to start in the first half of 2016.

The B.Delta Series comprises a design family with capacities ranging from 25,000 dwt up to 210,000 dwt, covering both standardised industry sizes (i.e. handy, handymax, ultramax, kamsarmax, newcastlemax) and cargo-volume sized ships for more ‘niche’ markets. As a result of the flexibility of the design, the ships can be tailor-fitted for various cargo types, ice-class notations, Laker versions, self-unloaders and other specialised trades.

The current orderbook of the B.Delta Series includes more than 110 ships, mostly the B.Delta37/43 types, but also on self-unloader and Laker ships. B.Delta derivatives, such as chemical tankers, are also under construction in China.

In total, already 40 B.Delta ships and derivates have been delivered so far, for nine shipowners from six different shipyards in China, all having performed successfully both during sea trials and in service for the last three years.

About Deltamarin Ltd:
Deltamarin is a ship design, offshore engineering and construction Group operating in the marine and offshore industries worldwide. The services include the full range of consulting, design and engineering as well as procurement, construction and installation. The Group employs around 400 experts in its own and associated companies located in Europe and Asia. Deltamarin is a subsidiary of AVIC International Maritime Holdings Limited.
deltamarin.com