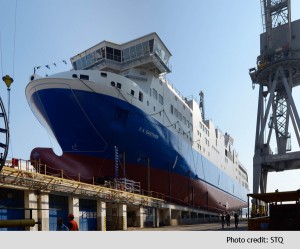 The Royal Institution of Naval Architects (RINA) has selected the LNG dual fuel ferry “F.-A.-Gauthier” as one of the vessels to be featured in their “Significant Ships of 2014” publication.

The vessel concept has been developed by the consortium formed by Deltamarin and Navtech Inc. for the Canadian owner Société des traversiers du Québec (STQ). Navtech Inc. is a Canadian naval architecture and marine engineering company.

F.-A.-Gauthier is the first gas powered ferry to be delivered to North America. It can run on either LNG or marine diesel oil (MDO). The LNG tanks are protected under the main deck. During the design our team had to define new regulation with Lloyd’s Register. This innovation has allowed for improved stability and less vulnerability aiming at risk mitigation. “At the time this was one of the first LNG designs for our company and we are very proud of the new features developed”, said Mr Jarmo Valtonen, Director of Deltamarin’s ship design segment.

F.-A.-Gauthier is 133 m long and capable of transporting 800 passengers and 180 cars. It will be operating on the route Matane – Baie-Comeau – Godbout in the Gulf of Saint Lawrence. Due to the challenging weather conditions of the area the vessel is certified to Ice Class 1A and propulsion class 1A Super.