You are here: Home › Project Forward develops dry bulk carrier of the future 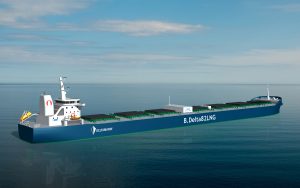 Project Forward, a joint development project to equip the dry bulk carriers of the future with LNG propulsion, has selected Wärtsilä to join the project with its 31DF dual-fuel engine. The project is led by Athens-based bulk carrier owner Arista Shipping, and other participants are Deltamarin, ABS and GTT.

The aim of Project Forward is to develop a commercially feasible LNG-powered dry bulk carrier design capable of complying with the International Maritime Organization’s Energy Efficiency Design Index 2025 standards, NOx Tier III and Marpol Annex VI SOx emission levels. The concept design will be based on the highly-optimised Deltamarin B.Delta design suitable for ships between 82,000 and 210,000dwt. It will employ GTT’s membrane-type LNG tanks for fuel containment. ABS will conduct concept and detail design approvals according to its rules for bulk carriers and gas-powered ships.

Allowing the use of either LNG or conventional marine fuel oils, the Wärtsilä 31DF dual-fuel engine is likely to form the basis of the concept’s propulsion system. In gas-mode the engine is IMO Tier III compliant without the need for any exhaust cleaning systems.

“We are excited to have Wärtsilä join this pioneering project with its experience in developing gas and dual-fuel engine technologies,” says Konstantinos Fakiolas, Deltamarin Sales Director, Ship Design.

The project will be presented during the Posidonia 2016 exhibition in early June in Athens at the ABS and GTT stands.

Read more about the project in Deltamarin’s earlier news release and about Wärtsilä’s involvement at its website .